Dawn of the Monsters—the sidescrolling, co-operative, kaiju beat ’em up—puts you right in the middle of the action. You can play as four different characters, each with their unique attacks and abilities. Pair that with stellar artwork and an exciting story, and you have a fun, action-packed game that is entertaining. After my interview with the CEO of 13AM Games, Alex Rushdy, (read our interview here), I was excited to play this game. And I wasn’t disappointed. 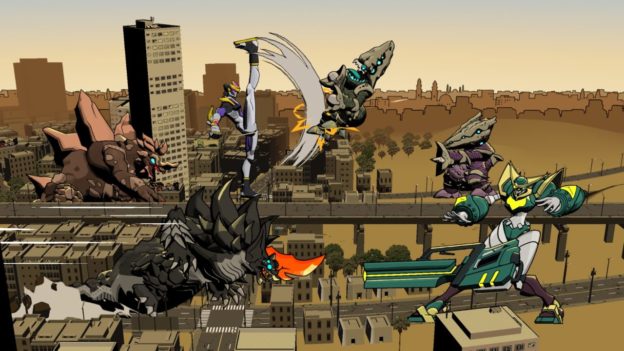 The first thing that stands out is the artwork. I love the graphic novel look to the characters, monsters, and levels. It feels like playing a comic book; even the details help the world come to life. For example, there’s a moment while you are smashing things and a flock of tiny birds fly by. It’s little details like this that give the characters a larger-than-life feel.

There are four characters to choose from: Megadon, a Godzilla-like beast; Ganira, a crab-like creature; Tempest Galahad, a mech controlled by pilot Jamila Senai; and Aegis Prime, the giant alter-ego of Eiji Murasame. Each character has its unique playstyle. For example, Megadon is a heavy hitter, whereas Aegis Prime focuses on agility. Besides the playstyle, each has different special rage attacks. Tempest Galahad has macroburst shot and boltshock mines, Ganira can summon a minion, etc. You earn a rage point after doing a certain amount of damage to the enemies, and each rage attack costs a certain number of points to execute. Besides the rage attacks, you also have a cataclysm attack—a powerful blow that deals a massive amount of damage. You build your cataclysm attack meter by executing rage attacks. 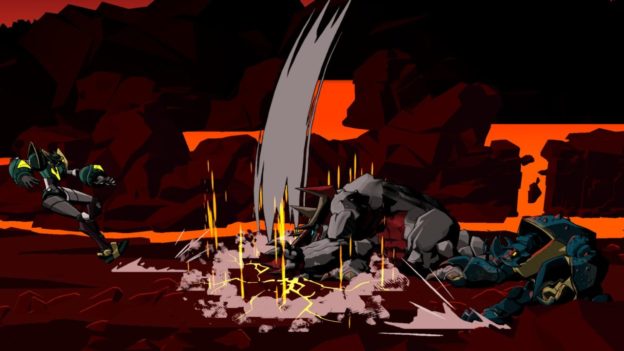 You have a few other aspects that will allow you to customize your beast. There are three augment slots for each creature. The augments give you boosts to specific stats. For instance, one augment gives you resistance to being stunned while performing light attacks. Another increases your movement speed when you complete a dodge. You’ll earn different augments after beating a level, and the better rank you get, the better your augments will be. This encourages you to replay previous levels to see if you can get a higher score and nab the better equipment.

You’ll earn money as you play through the levels, which can be used to purchase health and rage upgrades. You can also purchase different skins for each beast. The skins don’t give you any special abilities, but it’s a nice touch to customize your character. 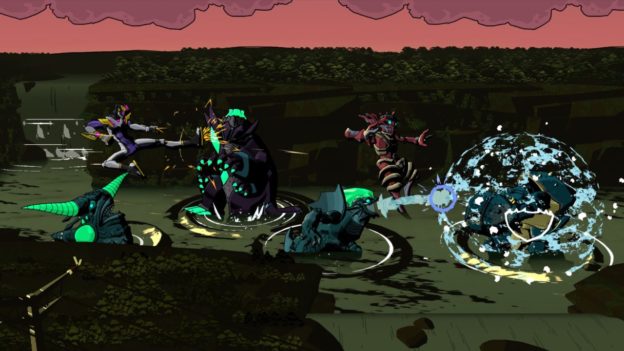 The combat is stellar, with the ability to do light and heavy attacks. You can even pick up buildings and use them as weapons. Each character also has a specific execution, and performing an execution will increase your health but will use a rage point. My favorite is Megadon’s, as he rips the head off the monster, which then can be used as a weapon. 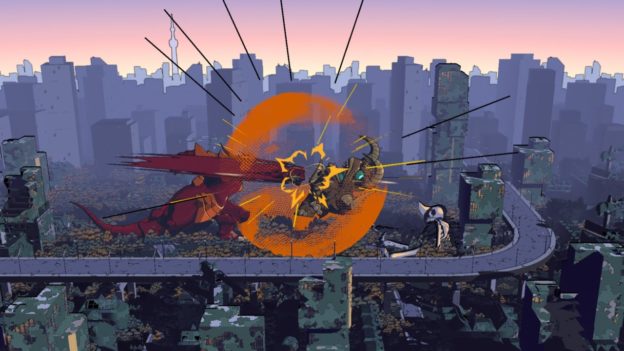 The story is rich, and there are plenty of opportunities to dig further into the lore. Eiji has been fighting the Nephilim for a long time, and he’s now joined by a team to help stop them. I’m not going to get into too much of the story, because I think half the fun is exploring and learning about the situation and history. I will say that all the lines are voice acted well. Some of the performances are over the top, but it fits the comic book style.

Some stages feel repetitive, but it’s enjoyable to smash the Nephilim. My contention is that the sub-stages in each level are relatively straightforward, but the boss fights ramp up in difficulty. My advice is to play with different augments and find those that suit the boss.