Elden Ring game’s new plus mode is out today and the players want to learn how to play it. Here is everything on the list before starting Elden Ring‘s new game plus version.

Short introduction before we get into the guide of plus mode. Elden Ring is an action role-playing video game created by FromSoftware and released through Bandai Namco Entertainment. The game was produced by Hidetaka Miyazaki. It was developed in collaboration with fantasy writer George R. R. Martin who wrote the material for the game’s settings. The game also was released for Microsoft Windows, PlayStation 4, PlayStation 5, Xbox One, and Xbox Series X/S on February 25, 2022.

“The Tarnished is one of many exiles called back to the Lands Between in hopes of repairing the Elden Ring and becoming the next Elden Lord. Early on in their journey, the Tarnished encounter a Maiden named Melina. As the Tarnished are Maidenless, Melina offers to act as their Maiden, granting them the ability to turn runes into strength, under the condition that the Tarnished bring her to the base of the Erdtree where she can fulfill her purpose. She also takes the Tarnished to the Roundtable Hold, a gathering place for other Tarnished seeking to repair the Elden Ring. There, the Tarnished learn from their divine benefactor, the Two Fingers, that in the wake of the Shattering and Queen Marika’s disappearance, her demigod children had taken the Great Runes, pieces of the Elden Ring, for themselves, and now war against each other to try and obtain the other Great Runes. The last known Great Rune holders are Godrick the Grafted, General Radahn, Praetor Rykard, Morgott the Grace-Given, Malenia the Blade of Miquella, Rennala of the Full Moon, and Mohg the Lord of Blood. ”

“Unravel the mysteries of the Elden Ring’s power. Encounter adversaries with profound backgrounds, characters with their own unique motivations for helping or hindering your progress, and fearsome creatures. Traverse the breathtaking world on foot or on horseback, alone or online with other players, and fully immerse yourself in the grassy plains, swamps, mountains, castles and other sites of grandeur on a scale never seen before in a FromSoftware title. ” 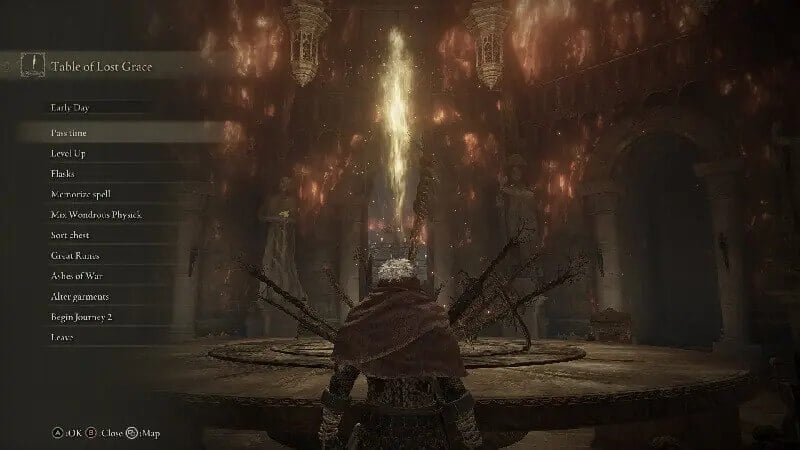 What is New Game Plus?

It’s not surprising that this mode makes enemies more difficult to defeat in Elden Ring, but rewards the player with a lot more runes for defeating them.

Participating in New Game Plus can also be an excellent method to unlock specific items because the majority of them are associated with missable quests that are interspersed. We won’t go into detail about them in this article, but be aware that unlocking every item in the game requires many plays. The new game is exactly identical to the first game with the exception of the difficulty and rewards for running increasing.

How to unlock Elden Ring’s new game plus

Elden Ring’s brand new game plus is available to download once you’ve defeated the boss who is the final one. After you’ve hit the final strike and you’ve killed it, you’ll be able to select an ending, and after that, the game will begin with the cutscene with roll credits. Start another game, or be released back into the world, there’s an option of starting the game on the roundtable within Roundtable Hold. The game plays the introduction cutscene, and then you are returning to the Church of Anticipation.

Checklist guide of new plus mode:

Important items that are linked to the progression of the story, such as two Great Runes that you collect from bosses, have to be brought back as well. Sites of Grace will need to be revisited also. If not, you’ll have the chance to drink the game’s resources before you begin. This way, you’ll get a variety of options to plan and the second time around.

Check out this full list of things you need to take care of prior to entering a new game and mode:

If you don’t want to lose everything you’ve spent hours collecting in the game. What exactly does and won’t be carried over to the next game.

What doesn’t carry over

Also in this mode, you can earn substantially more Runes by defeating enemies, as they are more difficult to defeat. They have greater health and are able to do more harm in New Game Plus but, you must remain on top of your game on Elden Ring.