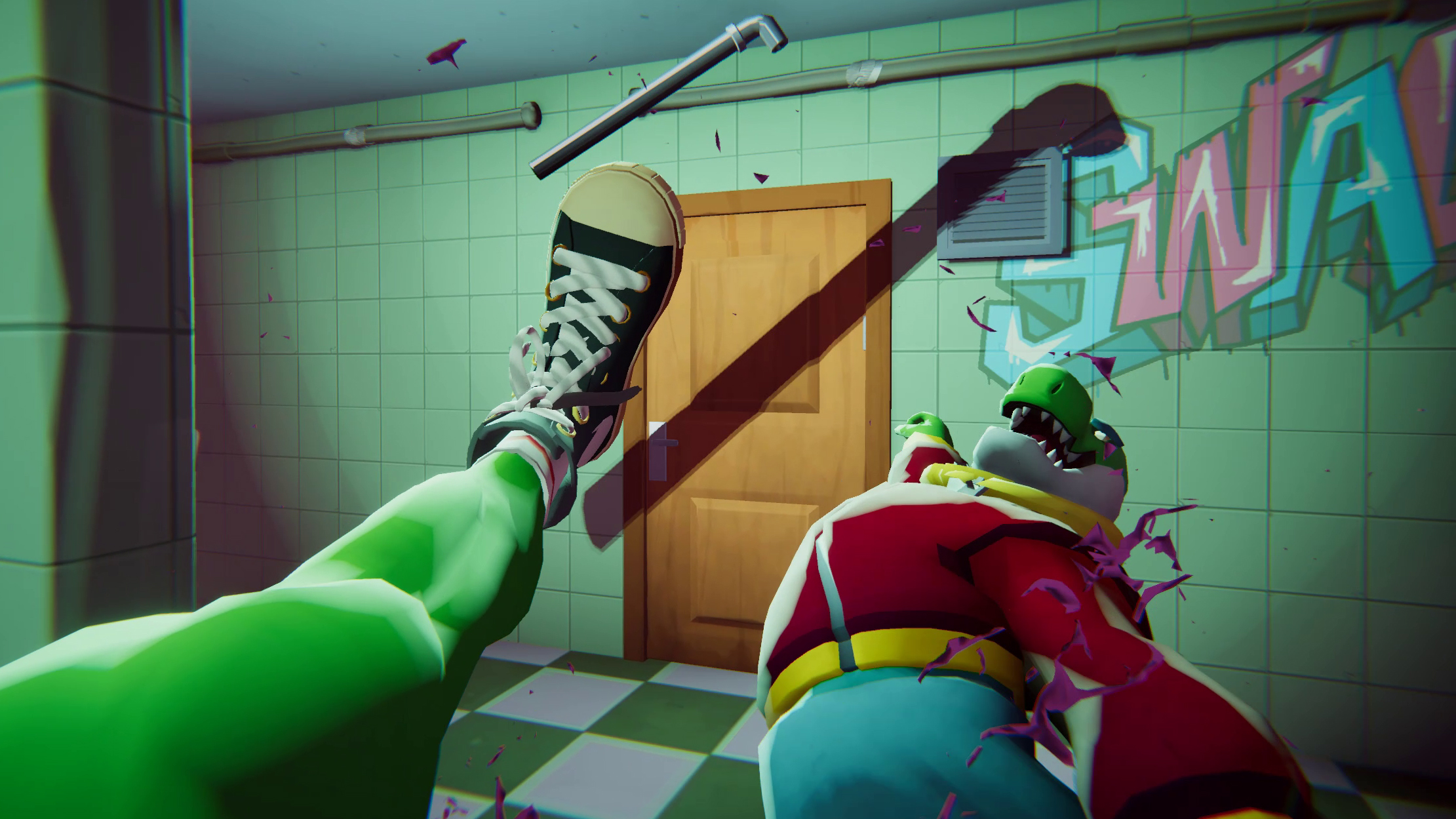 Kicking enemies is great. Kicking down doors? Also great. Using that math, kicking down doors so hard they fly into enemies is doublegreat. FPS Anger Foot is full of doors and enemies, and all you have to do is kick one into the other.

Anger Foot has been around for a while, the product of a 2020 game jam challenge to create a first-person game in seven days, which was followed by a proper alpha in 2021. For the past year it’s been regularly updated with new levels, enemies, weapons, props, and music tracks—plus plenty of new shoes for all the kicking you’ll be doing.

I dove in for the first time today, and it reminds me a lot of Hotline Miami, only it’s in first-person. Its levels are packed with armed gang members (anthropomorphic animals like crocodiles and crows) ready to swarm you the second you kick your way through the front door. Most objects are breakable, from toilets to light fixtures to furniture, so by the time you’ve kicked your way through the level the entire place is an absolute shambles, splattered with blood and littered with debris. (Gangs typically have exploding barrels in their hideouts, right?) Levels are timed so once you’ve kicked your way through one you can run it again to see if you can beat your own record.

The kicking is simply excellent. I have prepared a montage for you:

You don’t need to rely solely (haha) on your feet. There are guns, too: pistols, shotguns, and uzis, and you’ll probably need them at some point because as good as you are at kicking, it only takes one bonk from an enemy bat or a couple of bullets to put you down. There’s no reloading your weapons—when your gun is empty, you’ll have to grab another off a dead guy. (You can chuck your empty gun at dudes to briefly stun them). But it’s fun seeing if you can just kick your way through entire levels without ever pulling a trigger, plus doing a “feet only” run rewards you with trophies, which let you unlock new shoes.

I unlocked a pair of new shoes that give me extra ammo when I kick someone to death, but I prefer the shoes that give all my kicks extra power. I also have some sneakers that let me charge up an extra powerful kick, and it’s hilarious. I basically become Superman with a foot:

It’s all very brutal, bloody, silly, and completely foot-oriented. At one point I came across a heavy steel door I couldn’t kick down. Next to it was a metal valve wheel that obviously needed to be turned to open the door. At first, I couldn’t figure out how to turn it. Then I realized, like all problems, it could be solved with a kick.

Adding to the atmosphere is the bangin’ soundtrack, which provides dull techno thuds at all times, like you’re standing outside a nightclub. But the beats ramp up into a full blown techno rave anytime there’s action. As an added bonus, when your enemies kill you, they dance to the beat, and they dance quite well.

Anger Foot is pure silly over-the-top violence with killer beats for killer feets. It’s especially excellent if you’re in a crummy mood and just want to kick your way through a building full of animal gangsters, leaving a trail of shattered doors and bloodied bodies in your wake. You can grab the latest build here on itch.io for a mere “name your own price.”