When first checking out Aztech Forgotten Gods, I was pleased to see the theme centered on a version of the Aztec empire which didn’t involve certain foreigners coming in and wrecking up the joint. Instead, the Aztechs got to experience their own “Dark Ages” and “Renaissance/Enlightenment” period. There is a thriving civilization with astounding technology. The twist is that archaeologists have discovered some of the artifacts from before their technological decline and ascent, and the findings are astounding. And then…

Before we get all the way to the “and then…,” let’s look at “what is,” OK? There is a lot to unpack with this game, so let’s start with what the game is supposed to be.

Aztech Forgotten Gods is an open world, action/adventure game set in the city of Tenochtitlan. The world may be open—you can walk around exploring until the sun comes up in the game—but it is a small world. Your name is Achtil, and you are the daughter of a renowned archaeologist (aka “mom”) who has discovered some fascinating artifacts in an underground compound. Achtil’s life isn’t all that fun at the start of the game; she is what you might call a “freelance courier” (which sounds more glamorous than delivery girl). The game includes a lot of dialogue, so you may end up learning more than you really want regarding the history of your civilization. As with most adventure games, you are treated to the routine of earning points to get upgrades so you can take on progressively powerful baddies. 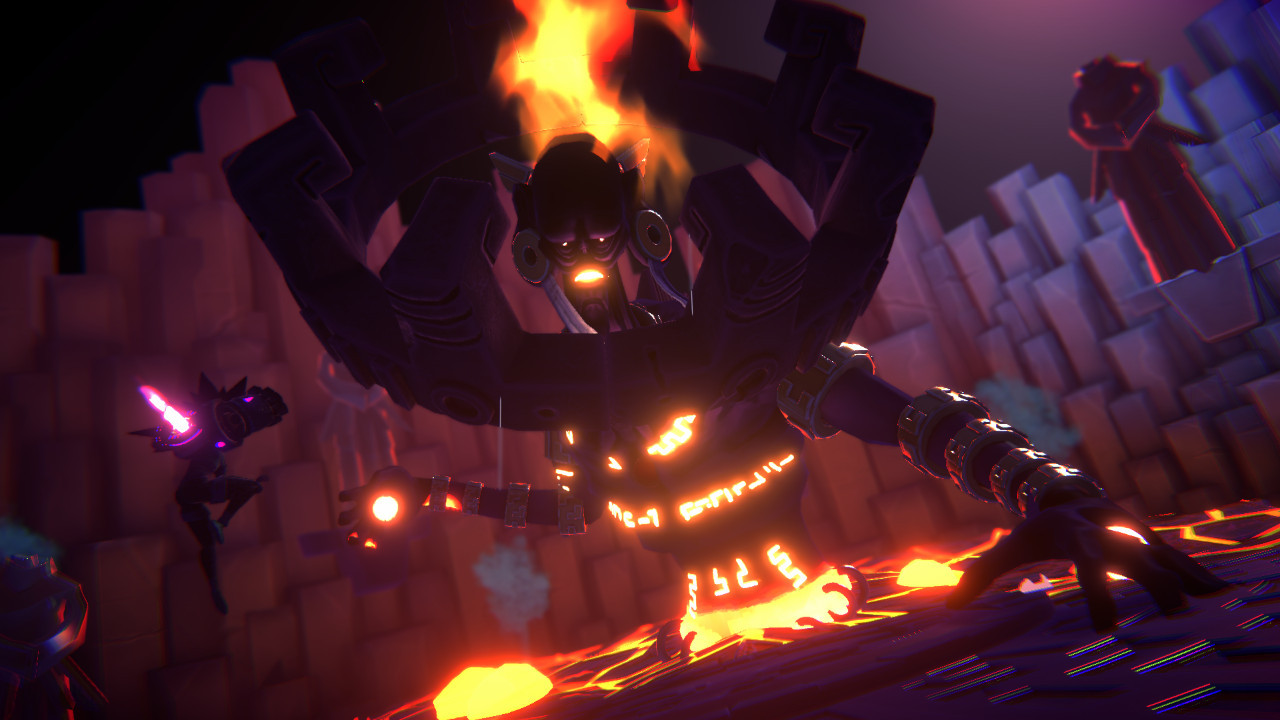 Speaking of dear old mom, you decided to help her out and ended up with a prosthetic arm which can do some really neat stuff. With this new toy on, you can really punch stuff silly, you can grab a ledge and run along walls as easily as running on the ground, and, of course, you can fly by using the built-in thruster. Of course, as the hero of an adventure game, your job is to ultimately save the world. No pressure.

Now that we have taken a look at the nature of the game, let’s take a look at the features and functions. I’m sorry to say that the review gets less happy from here on.

At the outset, everything looked really inviting. As mentioned, it takes place in a future where the Aztec people (notably clever folks) were allowed to advance without interference. They created a seriously advanced civilization, and by itself, this is an interesting experiment. Coupled with the unique visuals (art, architecture, etc.), it should have been enthralling. 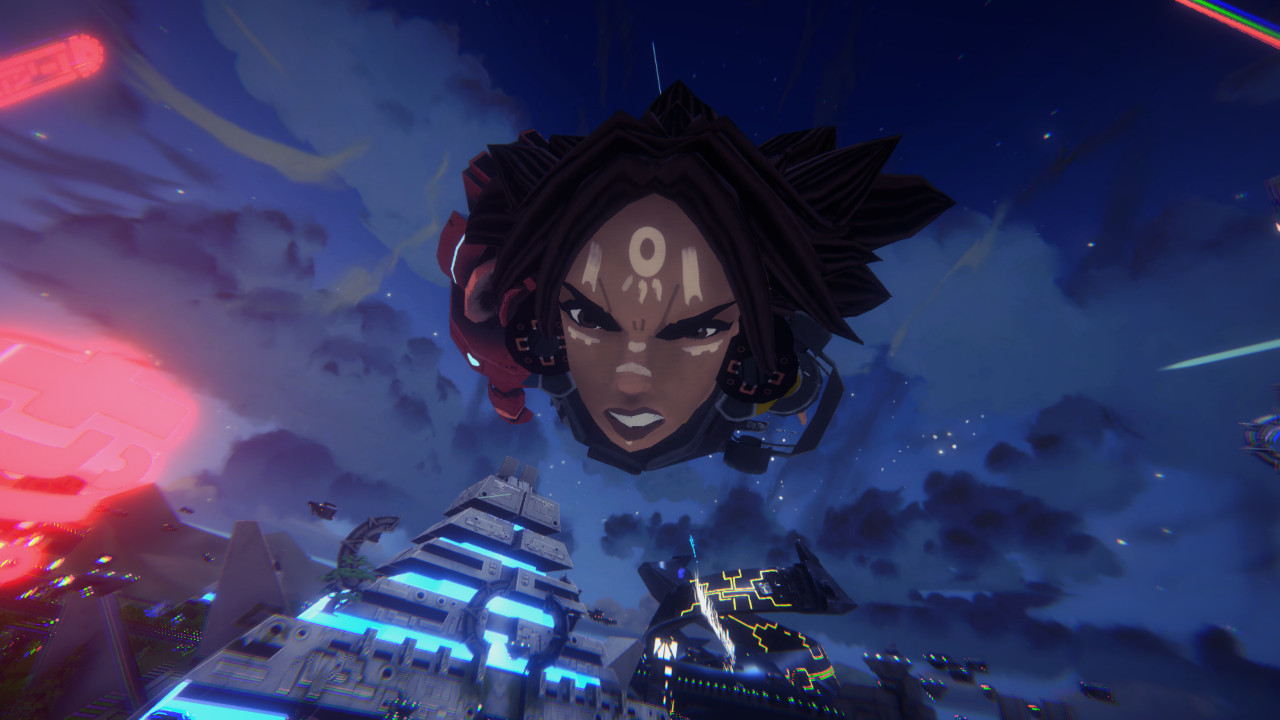 But it isn’t. When I played through the tutorial, the game looked great and there was much promise in those sequences. Once I got into the game proper, the quality of the graphics took a significant hit. The city contains just a few Aztec style pyramids scattered around a city which otherwise looks like it was constructed out of those cardboard “building blocks” from kindergarten. The textures are a bit flat and smeared-looking at close range. On top of this, there are far too many rendering issues: ways to see under buildings which are sitting on the ground, finding yourself half inside a wall, looking up from under a segment of sidewalk…you get the picture.

As mentioned, the city you are in operates on an open world. This is a small world, so it doesn’t take too long to get around. The problem is that for the first couple of chapters you are wandering without any significant guidance. There are spires of light which indicate objectives (don’t forget to look up to spot them). Some of these objective markers indicate where you can engage in side quests (like combat) to get extra experience or loot. These are not well executed and are a bit disjointed from the main story. If the primary story and action sequences were better prepared, these side-quests could easily be done without. 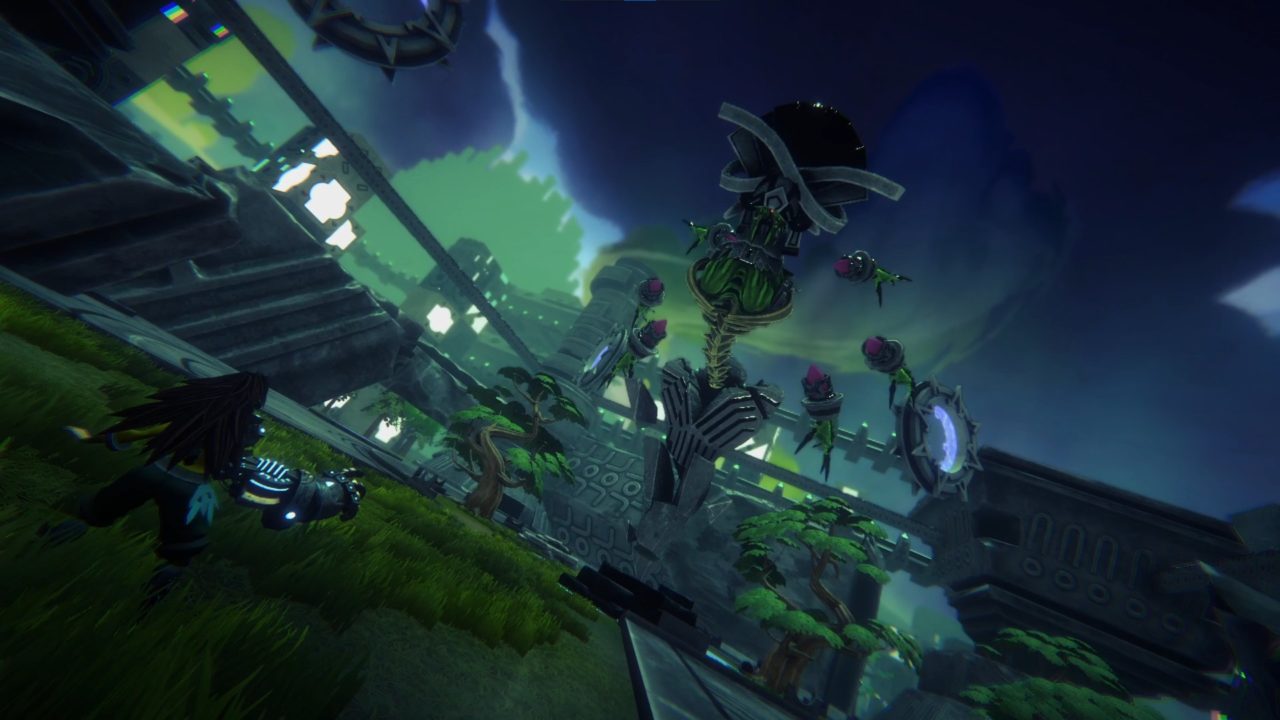 What appears to be a source of help turns out to be almost a complete time-sink, and that is the other people in the city. You can walk up to just about any person in the place and press A to talk with them. The problem is that they will talk to you and provide almost nothing in the way of useful information. Some of the townspeople’s dialogue gets a bit preachy to the point of being sanctimonious. Not only do the NPCs in town talk too much without saying anything important, they look a bit like balloon creatures with flat to nonexistent features. So, you are left to wander around a blocky city with flat people and are expected to just figure it out. Fortunately, the passage of time doesn’t negatively affect your waypoints for advancing the story.

The cityscape problems have already been addressed, so let’s look at the characters. Here, too, we see a mix of promise and disappointment. The futuristic aesthetic could be great fun, but the graphics are a bit flat here as well. The characters’ outfits, features, and movements are less than stellar. The way people move during dialogue sequences looks like a bad loop with a bobblehead—the same few motions repeated, and in an ofttimes jarringly unreal fashion which serves to be slightly disturbing. 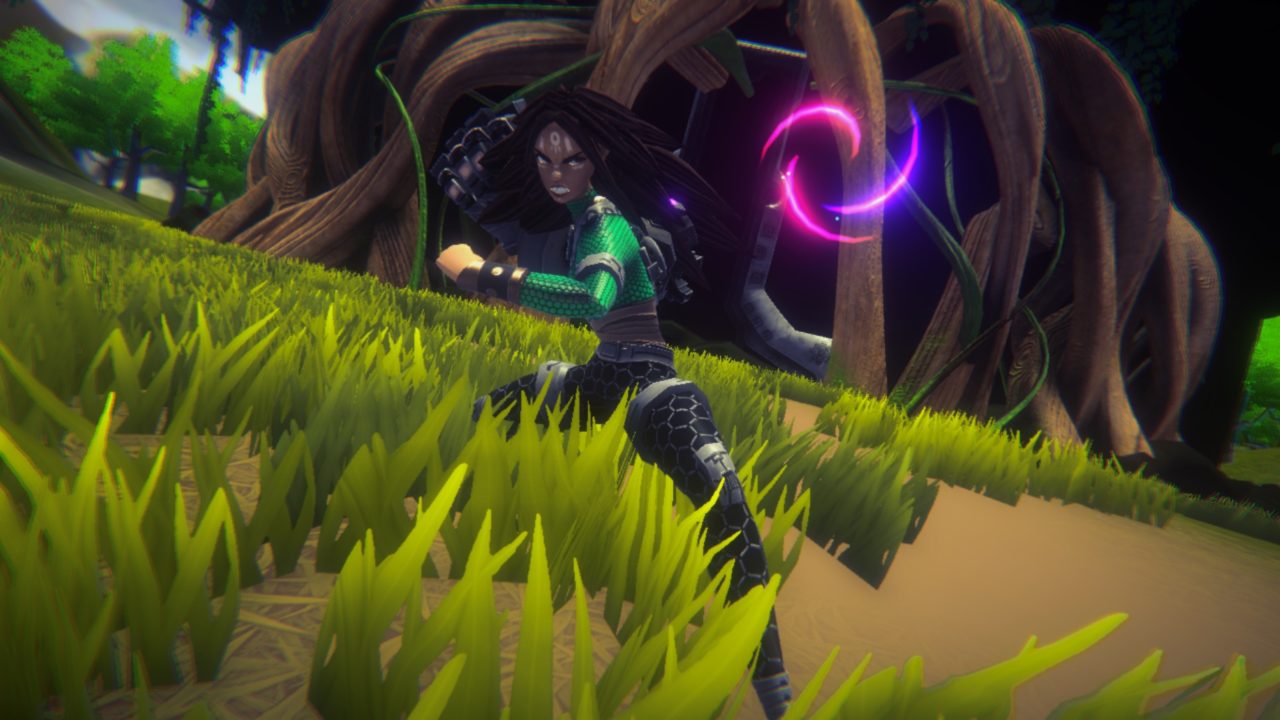 (One odd observation– glasses frames do not (and should not) move like eyebrows.)

Then there is the audio. I fully understand the value of not having to record all the dialogue in several languages when you can use easily translated subtitles, but the clips for all the “uh,” “mmm,” “huh,” and so-on are few and repeated to the point of being annoying.

The battle sequences are also problematic. Your new arm is quite the whammer, but the game mechanics make it difficult to really use it to its full potential. There is a sort of target lock feature, but it is far enough from perfect to start to be a hindrance. Combat often ends up just hitting the attack button as fast as you can just to stay alive. 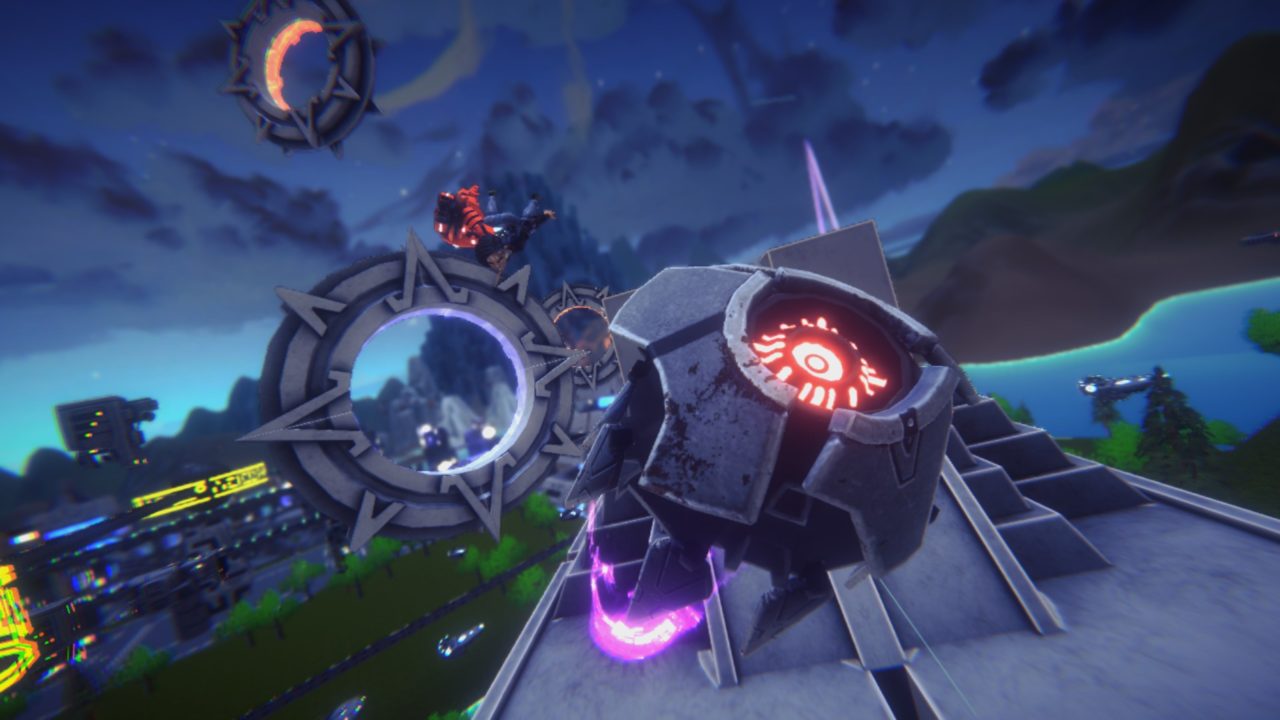 This isn’t really related to combat, but I’m throwing this in as a warning; there are a few bodies of water in the city and one of them will electrocute you slowly. There is no getting out once you get in, you just wait to die. Real fun, there.

Aztech Forgotten Gods is set up with all the right elements, but the execution feels either rushed and unfinished or overexposed and not well-developed. I was really hoping for more, but the mildly instructive tutorial is about the best part of the whole thing.