There was a time before I knew about killing games. Before Hunger Games, before Danganronpa, before Squid Game. And then, I played 999.

On the face of it, killing games seem sociopathic: We tend to follow a single “player” who is unwittingly enrolled in a game where only the strongest, cleverest, or most underhanded person can survive, and win the prize. Everyone else will die, or be killed, in traumatic and gory ways designed to entertain the fictional audience. The problem is that the fictional audience is also a real audience — an audience of one. The player. You. The premise of the killing game is that you have to be pretty sick to enjoy this spectacle of horror, but the fact that killing games persist in media means that they are enjoyable. Does that make us sick? 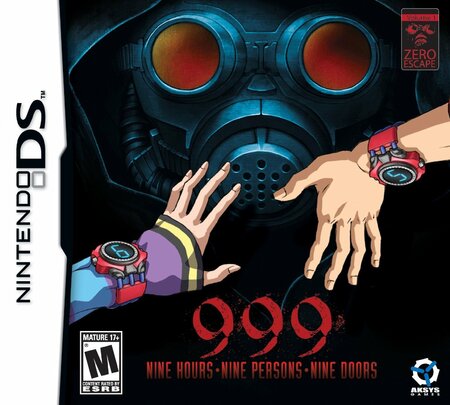 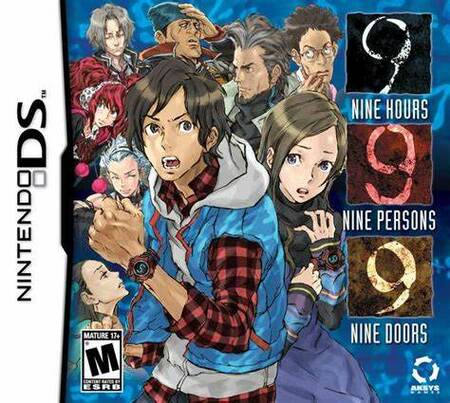 999: Nine Persons, Nine Hours, Nine Doors is a Saw-like killing game that takes place in a mysterious sinking ship full of locked doors, scrawled with huge, single-digit numbers in red paint. There are, as the title suggests, nine people aboard the ship, each with their own digital watch-like device bolted onto their wrists, each with a different number on said device. The players must group together to enter the numbered doors by adding together their numbers — 4 and 1 can go into a 5 door, for example — but if a player goes through a door they shouldn’t, or tries to remove the device, they explode.

Unsurprisingly, people start dying pretty quickly, because almost everyone on board has secrets, and some of them are the murdery kind. But that’s not really the crux of the story in 999, as it slowly becomes clear that there’s something else going on. Why are you all here? Who put you here? Who is everyone? And is it actually possible to escape?

I don’t want to spoil the game, because I think everyone deserves a chance to play it themselves, and have the mind-blowing twists and revelations happen in real-time. Also, I’m not entirely sure I could explain the plot, even if I wanted to — it’s the kind of story that only really makes sense if you’re actively following it, and there are plenty of bits that you might need to have knowledge of basic philosophy to understand. So instead, I want to talk about what 999 represented in the world of gaming — and what killing games really mean.

Because, right, listen, I’m not a sociopath. Or a psychopath. I’m pretty normal, and capable of distinguishing fact from fiction. I’ve never, not even once, trapped an assorted group of teens in a warehouse, a school, or a boat, and made them bump each other off. I don’t have the resources for that! But playing killing games like 999, Danganronpa, and Virtue’s Last Reward is a fascinating look into the human psyche, accompanied by brilliant writing. (Well, most of the time, anyway. Let’s not talk about Danganronpa’s love of dodgy and occasionally creepy tropes.)

Killing games are not original. From the gladiatorial fights of the Romans to the 1924 story “The Most Dangerous Game“, humans have always been fascinated by killing for sport, and there is almost always a class system involved to determine who has to play and who gets to watch. It’s basically a hyper-extreme version of modern poverty, where billionaires hoard wealth and those below the poverty line starve, except that the game allows the latter to potentially become the former… while the rich patrons of the game watch.

In 999, unusually, the game is not divided amongst class lines — the poor, the young, the old, and the rich mingle alike in the captive arena. Instead, the motive here is not to elevate oneself above poverty, but it is twofold: One, for the captives to escape (the reward is their lives) and two, to unwittingly form the solution to an old problem, and be the unaware cogs in a machine built to enact revenge.

As Junpei, one of the people trapped in this killing game, you are expected to team up with a handful of other people to solve a bunch of logic puzzles to solve each room, and then make difficult decisions when the entire group joins back together again after each puzzle — decisions like who to team up with next, and potentially who to leave behind if the numbers don’t add up.

As the player, you’re not actually faced with the threat of death, because you can just put the DS down at any point — but the stakes for each puzzle are sky-high nonetheless, as each character that you meet is gorgeously intricate, complex, and deep, and you want to see each of their stories to the end. It’s not just about rescuing Junpei, your avatar — it’s about trying to find the best solution, the one where everyone lives.

So yes, there’s perhaps a small crumb of sociopathy in the enjoyment of a killing game — or at best, a morbid fascination, just the same as people who enjoy true crime. It helps that we have some distance from the stories, either because they’re fictional or because they’re being told as if they’re fictional, so we never have to come face-to-face with the real people behind the stories. But it’s not just about enjoying the macabre. Killing games allow us to witness the depths of human depravity — but also human generosity.

Hunger Games shows its protagonist giving an impromptu funeral to a young girl, even though it puts her at risk. Squid Game shows its protagonist taking care of an old man, even though the old man is statistically the worst game partner to pick. And 999 shows us people who want to escape, but not always at the cost of the deaths of others. The easiest solution to 999 is to kill everyone, and use their bracelets to escape without having to have a bunch of tedious conversations. But killing games would be boring if everyone in them was a sociopath; the excitement and intrigue comes from the fact that these players care too much to take the easy way out.

999 is one of the best killing game games out there, and so is its follow-up, Virtue’s Last Reward (the third in the trilogy, Zero Time Dilemma, isn’t quite as good), and that’s largely due to its utterly brilliant story, and its unique narrative presentation. It’s more twisty than a bag of fusilli, and more turny than Lot’s wife, but that’s not its only appeal: None of its characters are who they first appear, and by the end of it, you’ll want to save almost all of them — even having seen their worst flaws. The test isn’t just completing the puzzles in the escape-room segments. It’s finding humanity in an inhumane situation.