Hello! I am Göksan, founder of NAISU, and the main developer

In Mokoko X, we want to resurrect the specific arcade genre while adding a modern touch. The game play is simple: capturing the bigger portion of the game screen by drawing lines. The graphical style of our game is a combination of retro-arcade/anime. We’ve made it colorful and lively as possible. In each level, you fight against absurd bosses who are a nuisance to our eight girls. All the bosses and girls have their own short stories and connections with each other.

Talking about the stories, I wrote all the short stories and inspired from my elementary school times’ imagination. So, you will probably find them quite absurd and childish from time to time.  I want to give some examples of the short stories from which you will learn the answers to the following questions:

The main reason you fight with these bosses is mainly to help out our lady characters. All the bosses have their special gang of minions as well.  All the characters in the game are fully animated and voice overed both in English and Japanese.

There is also a main story of Mokoko which unlocks part by part after completing each lady/chapter. But I don’t want to spoil it here.

We also made  sure that leaderboards are very active and heat up the competition for the top scores. People say the game is a bit hard, but so was the arcade age! But we are not merciless, there is an Easysetting. After you complete the story mode which has 32 levels, Arcade Mode unlocks, where you have to finish all the levels in sequence with a limited number of lives. We have a special leaderboard for this level. That’s the place where the most highly skilled players can show off their skills.

Lastly, I love this old genre and we are confident that we have done our best to be a worthy successor. I hope you feel the same. Good luck and have fun! 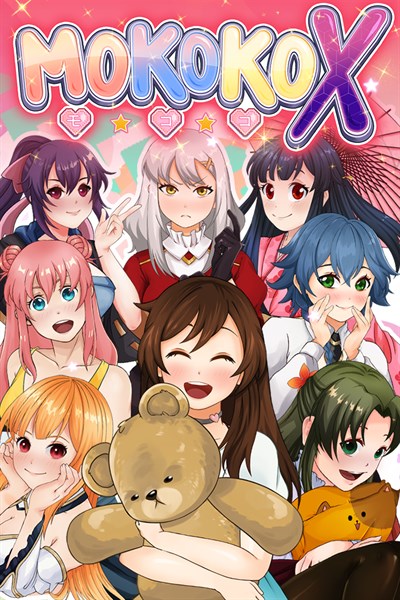 About
Mokoko X was inspired from the arcade games from 1980s and 1990s, a popular gaming style back in the time. Mokoko X looks to resurrect the soul of the arcade genre while adding a modern touch. There are 32 levels in Mokoko X; each level has its own unique boss and minions. The main goal is assisting the unlucky girls that need help from the weird bosses. This is sometimes passing a mobile game level, sometimes helping out with the insects in the kitchen.

Gameplay
The main goal is conquering the bigger portion of the screen. While you are in your own area, you are safe from the enemies until your shield empties. You conquer new areas by drawing out of your area. Drawing, however, deactivates your shield and exposes you to danger. Your shield decreases constantly. If you do not conquer at a certain frequency, your shield will burn out and you will not be safe on your own areas as well.
There are 3 difficulties in the game. The difficulty affects enemies, your shield, and required conquered area percentage for the victory.

Stories
Have you ever asked these questions to yourself:
How do you stop a heartless but not soulless emperor?
Can someone be a gyroscope and a guard dog at the same time?
Why do those ducks attack us?
Are there really demonic headphones in the world?
Why do lizardmen need a plastic toy for summoning their god?
How do you become a villain after revolting against the ant queen?
What do scientists want from Albert the wonderful sea creature?

Well, Mokoko X answers all these questions and more!

Here are some missions!
– Help out Iren with her arachnophobia and fight with the imaginary spider Mr.Fyodorov.
– Protect Issa’s house from getting pillaged by the ghost pirates stuck inside the anchors. They were not the bane of Seven Seas – the crew was killed in their first naval battle.
– Toru wished to be a mosquito to annoy people. A local witch heard him, and transformed him into a mosquito. Now he causes trouble to people every night.

Fight against the weird enemies…
… and learn about their absurd stories!