Sega truly were their own worst enemy at times. In the early days of the Genesis when they had little third party support Sega were aggressive in bringing games to the system. Be it arcade ports or exclusive titles, in any given year Sega of America released a ridiculous number of games. But that also meant many brilliant titles slipped through the cracks. Ristar received little promotion while Gunstar Heroes is a top ten action game of the generation that not many heard of at the time. Pulseman is another gem they ignored; they had so little faith in it that Pulseman only came to the US through the Sega channel. That such a brilliant game might as well have not existed while crap like the Ooze infested store shelves is a fucking shame. Don’t be blind like Sega, go out and buy Pulseman through any means, it is fantastic.

In the future Doc Yoshiyama creates the world’s most advanced AI and dubs it C-Life. The good doctor falls in love with his creation and uploads his consciousness to the internet so they can be together. Somehow the two combine their DNA and Pulseman is born. Unfortunately the years in the digital world drive Yoshiyama mad and he returns to the Earth to conquer it, calling himself Waruyama. Pulseman is the only one who can stop him as he can travel between the digital and physical realms.

Pulseman has a wide variety of abilities. He has a few melee moves; a straight punch, sweep kick and an odd upwards bicycle kick. But his greatest asset is electricity. By running a short distance you can build up a static charge. This charge can be released as a long distance pulse arrow. You can also double tap twice to dash forward a short distance. Most importantly your electric charge powers your Volteccer ability.

Volteccer transforms Pulseman into a bolt of electricity. In this form you can blast off in any direction. Bu even better, you can bounce off walls to reach greater heights or destroy walls. Possibly the coolest use of the Volteccer power is to ride power lines in some of the game’s high speed sections. This particular ability comes into play heavily throughout the game. You are invincible in Volteccer form but it does have limits. To keep it from being too powerful the game cleverly designs its levels so you can’t use it all the time. The virtual world is mostly composed of broken platforms without sufficient space to build a charge. In addition water will send you crashing immediately. These limits make most of the boss battles an actual challenge despite your vast capabilities.

To match its excellent mechanics Pulseman is gifted with fantastic level design. Each level takes place in a different country around the world. Each themed country brings with it new obstacles and inventive ways to use your powers. The US takes place in Las Vegas and begins with a high speed chase with Waruyama. It then proceeds inside a trippy casino designed like a roulette table and use the volteccer to navigate its walls. India introduces water filled levels and the perils of navigating around it while still being charged. Later moments call to mind Gunstar Heroes as the game switches to Waruyama’s viewpoint while he targets you from the foreground. It can be a little frustrating at times as it sometimes asks for a level of precision the mechanics are not capable of but as a whole the gameplay will always keep you coming back.

The difficulty curve is almost perfect. Pulseman can only take three hits before death. Health items are not in ready supply so you have to be careful. There are not many enemies and most damage you take will be due to spikes and such. The game challenges you through its environment instead. You can build up a nice stock of lives as you will need it in the second half. Boss battles are creative and fun while offering a decent challenge unlock Sonic the Hedgehog. The difficulty is not perfect; there are many blind jumps, probably too many for my liking. Also as you rocket around it is easy to fall into pits. But overall the good far outweighs these frustrating moments. 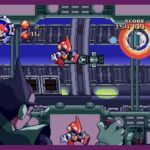 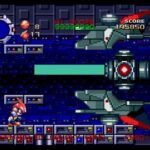 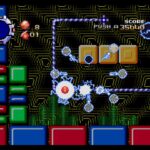 As a late generation title Pulseman looks incredible. That is mostly due to its brilliant art direction more than special effects. Ken Sugimori of Pokemon fame designed the characters and world, making the game incredibly distinct. The sprites are large, well animated and full of personality. This is an incredibly colorful game, especially in the virtual world. Special effects are at a minimum and the game is better for it. The electronica soundtrack makes excellent use of the system’s FM synth to deliver a score that is mechanical in feel and matches the half real world/half internet action.  There’s even a decent amount of voice clips, surprisingly all in English with subtitles!

Pulseman is a phenomenal game and one of the best platformers of the 16-bit era. Endlessly creative and technically accomplished to boot, Pulseman is one of the best Genesis games in my opinion. Although hard to find initially it has since been re-released a number of times. You have no excuse not to experience platforming greatness.