Earthworm Jim was destined to be a star. Compared to the majority of his mascot brethren the amount of work put into making him a fully realized character was apparent. The majority of the time multi-platform games are near identical. But in the case of Jim’s first adventure the SNES and Genesis versions have some stark differences. The Sega game is the original and serves as the base for all other versions but developer Shiny took the time to use the SNES features to make the game even more beautiful. Unfortunately it lags behind in other areas making it the slightly inferior game. 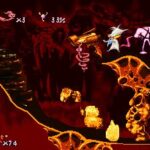 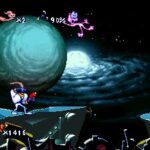 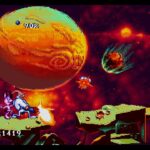 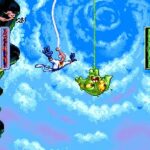 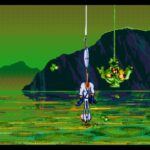 SNES on the left, Genesis on the right

Right away the visual differences are immediately apparent. Because of the SNES’ lower resolution Jim is fatter due to the horizontal stretching. However Shiny went to town using the SNES’s expanded color palette and added grunt. New Junk City has a slightly brighter color palette and an awesome lens flare in its background. Certain areas that were completely flat or missing background art have been updated and now look “complete”. This extends to even the most minor areas; the sky in Snot a Problem which was a flat color now features a beautiful cloudy backdrop. That they went so far for something you see for seconds at most is incredible. Most levels have one or two additional layers of parallax scrolling which makes an already good looking game look phenomenal.

Some of the graphical changes affect the atmosphere for the worse. In Down the Tubes the Genesis has a wavy effect that simulates ocean waves that is missing from the Nintendo game. This effect makes the level look spectacular and its absence is notable. The backdrop of Peter Puppy’s home world is completely different between the two versions. The Sega version takes place in a fiery galaxy that is atmospheric as hell and looks fantastic. On the SNES it takes place at night time and while it looks great with its extra parallax does not seem to fit the mood. You will also notice there is a few seconds of load time between levels. It is not annoying but it is noticeable and seems weird. It reeks of the game needing a little more optimization.

The sound effects and music also have their share of differences. In general the developers at Shiny/Virgin excelled at getting the most out of the Genesis FM synth. While most of the music is near identical the beat heavy songs sound worse on the SNES. The more melodic pieces such as in What the Heck sound significantly better. Of course this all comes down to personal preference. There are a significant number of sound effects and voice clips missing from this version which is also a casualty of the game not being as compressed as its Sega counterpart. Unless you play the two side by side you would never notice. But I did so you don’t have to.

The creativity that permeates every inch of Earthworm Jim is what makes it so distinct from its competition. Nearly every level introduces some cool new play mechanic and is rarely straightforward. In Down the Tubes you must unleash giant hamsters to eat the cats blocking your path. The second half is a tube race in a submarine that is one of the game’s hardest sections. In For Pete’s Sake you must guide the otherwise chipper Peter home. This is easier said than done as all manner of danger lurks, from UFOs, meteors, and killer tentacles. This one is my favorite even if it drags too long. Not every level is a slam dunk; Andy’s Asteroids wears out its welcome and unfortunately takes place after each stage. And the last level is a nightmare to navigate. Sadly Intestinal Distress was cut from this version, another point in the Genesis’s favor.

Earthworm Jim is a difficult game and that still applies here. The fact that life restoring items dot every corner of each stage should make this obvious. The level design is often confusing, especially in certain stages like Level 5. This is exacerbated on the SNES with its lower resolution and shorter viewing distance. There are many platforming sections that rely on blind leaps of faith because you cannot see further ahead. This is where the game’s Genesis roots hurt this version. The more creative stages like Snot a Problem will sap your lives while you learn their mechanics. Unfortunately continues are few and there are no passwords to mitigate this. Although this edition is shorter it is little consolation. You are going to have to work to complete this one.

Earthworm Jim is a good game regardless of the platform. But if you do have the option the Sega Genesis game is the one to get. While not as strong visually the extra content does put it over the top. SNES owners have to take a back seat with this one.